First camping for the summer

Friday July 3rd, while doing the grocery shopping, we decided to go camping that weekend in one of the nearby forests. To a lake called Langevann (“Long Lake”).
The trick was to find suitable food that didn’t need a fridge. Sliced bread and some toppings did it.
Back home we had to dig out the camping stuff: Tent, sleeping bags, clothes, backpacks… We told our youngest son he was coming with us and he didn’t have to much objections.  🙂

Saturday arrived with beautiful weather. I like to take it easy at the weekends, no stress, long breakfast, reading the paper.
After brekkie we finished packing and decided to stop by the sports shop on our way. Hubby needed a sleeping bag, and youngest son needed a back pack.

So sleeping bag, back pack, maggots for fishing was bought. Last stop was to buy some sodas and candy to keep the teenager happy. 🙂 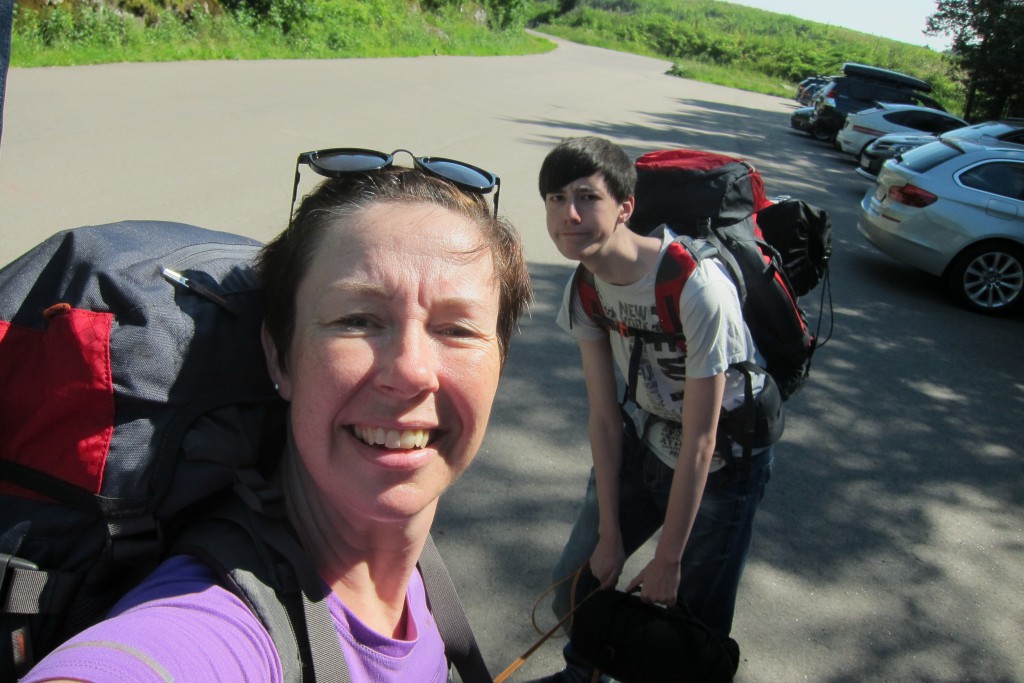 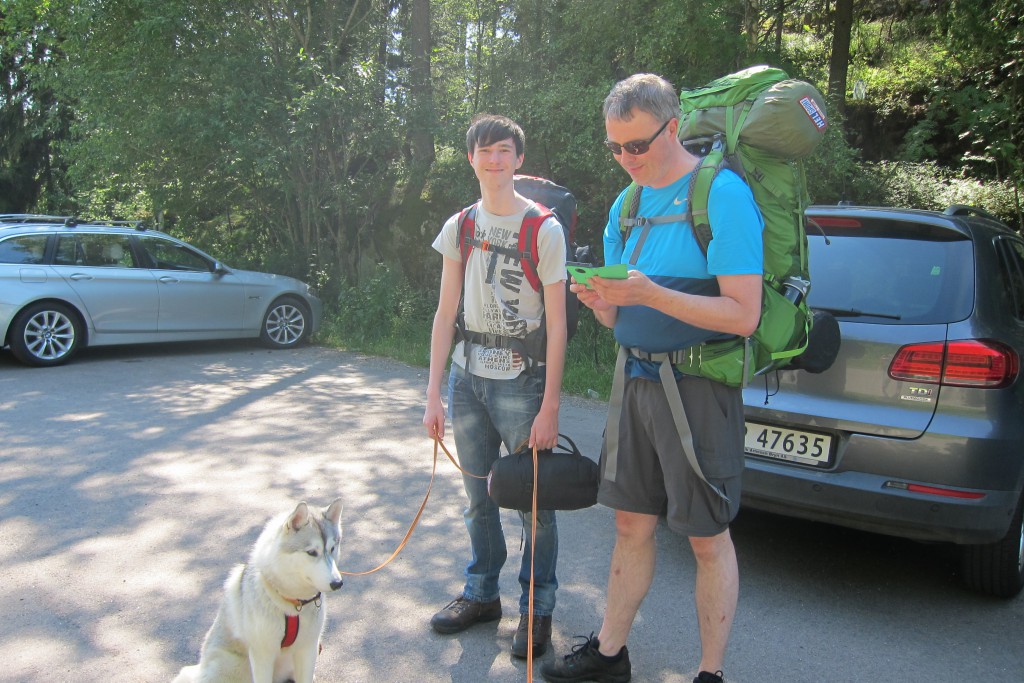 We parked at an excursion parking next to a golf course, which used to be Oslos landfill some years back… Did a repack to the new back pack, then we were ready to go. The good thing by parking right there, it’s only 1 hr walk to the lake. The not so good thing that day, it was so hot both me and son got a headache walking to the lake. Even though we both drank a lot of water. And Hubby got a huge blister on one heel. At least he learned that not wearing socks in hiking shoes is silly…

It didn’t take long after arrival before Hubby had changed into his swim shorts and jumped into the lake. Both me and son changed into bikini/swim shorts as well, but spent many minutes adapting to the somewhat cold water.
Poor Issi, stood on the shore whining. Wanted so much to join us , but obviously found the whole concept a bit weird and scary. I swam back to the shore and helped her out into the water. Success! She swam a few meters before heading back to shore. Good girl! 🙂 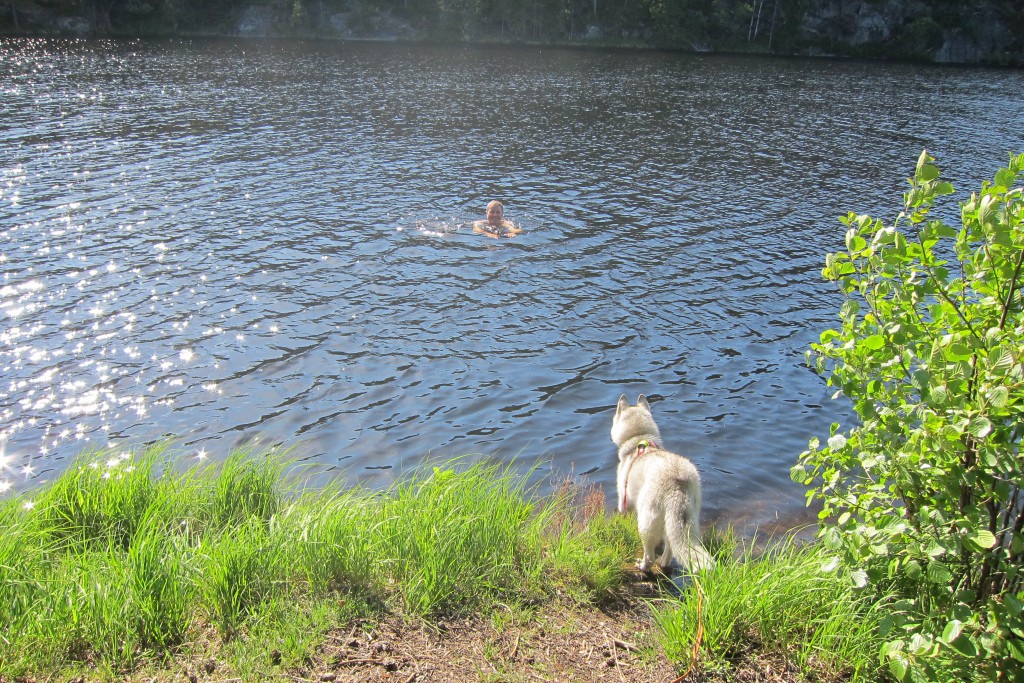 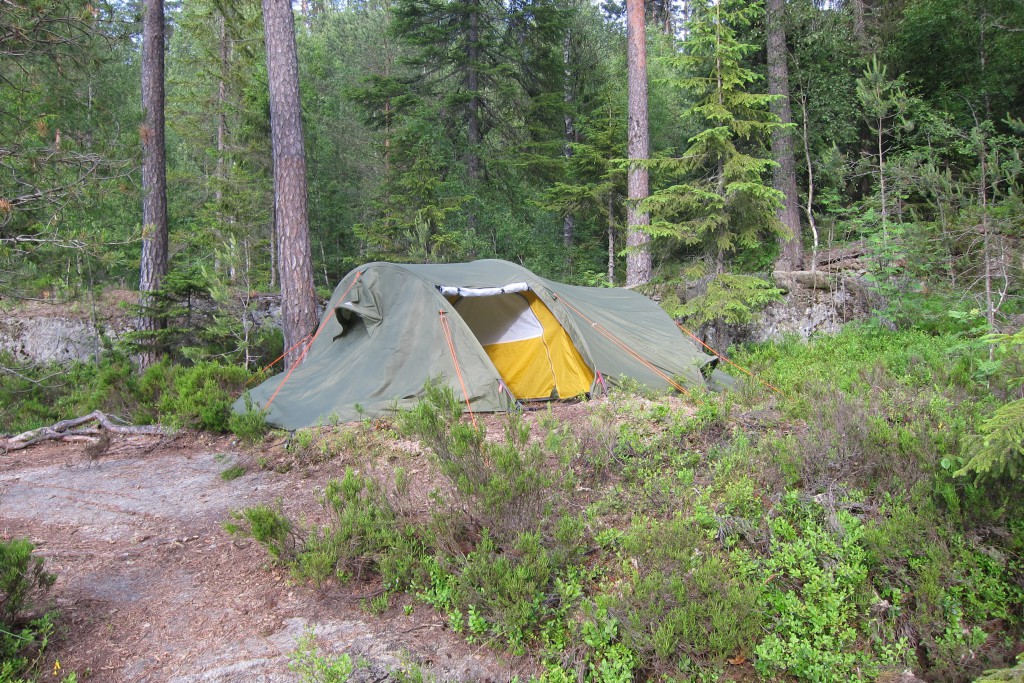 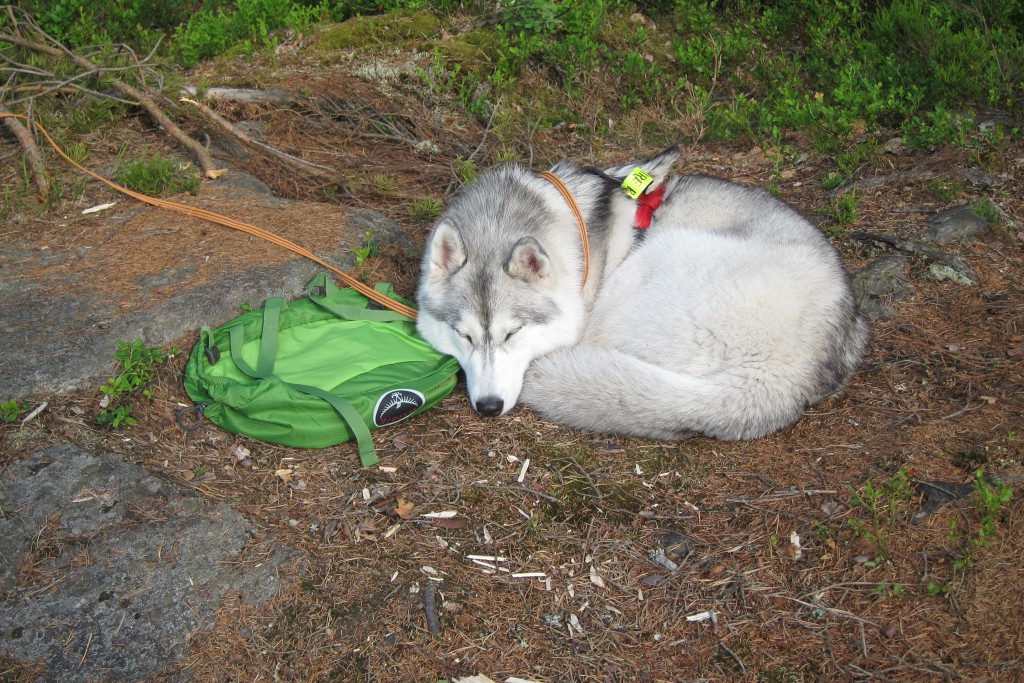 We found a decent place to put up the tent and had some very late lunch. Decided it was too early to light a fire for the hot dogs. It’s so relaxing to sit by the water, and do nothing!
We were not the only ones camping by the lake, but it didn’t feel crowded at all as the others were on the other side of the lake. 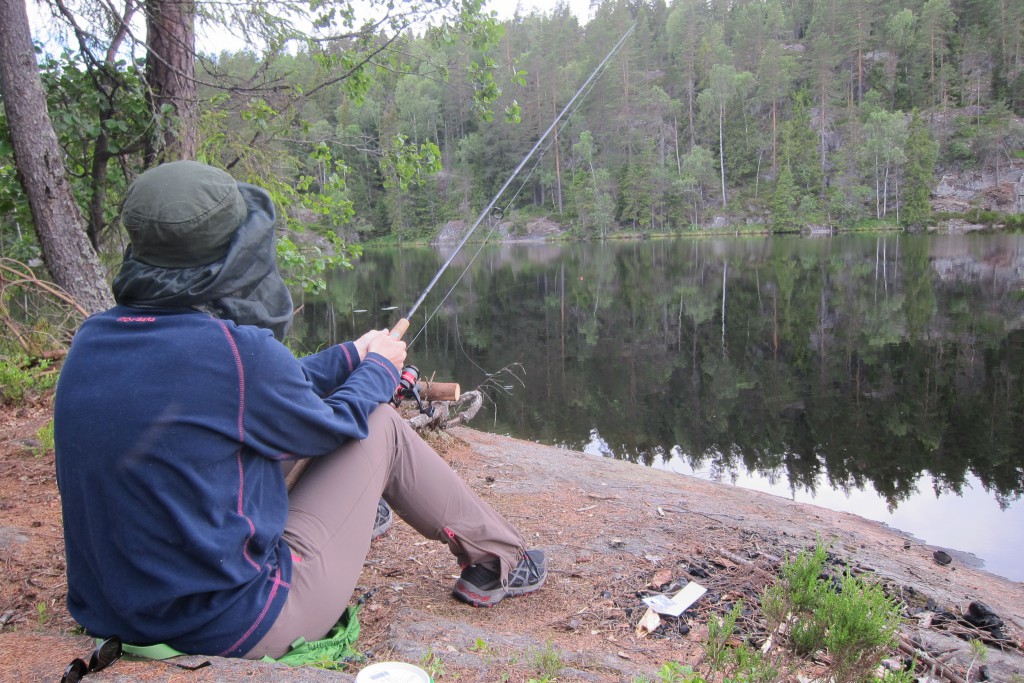 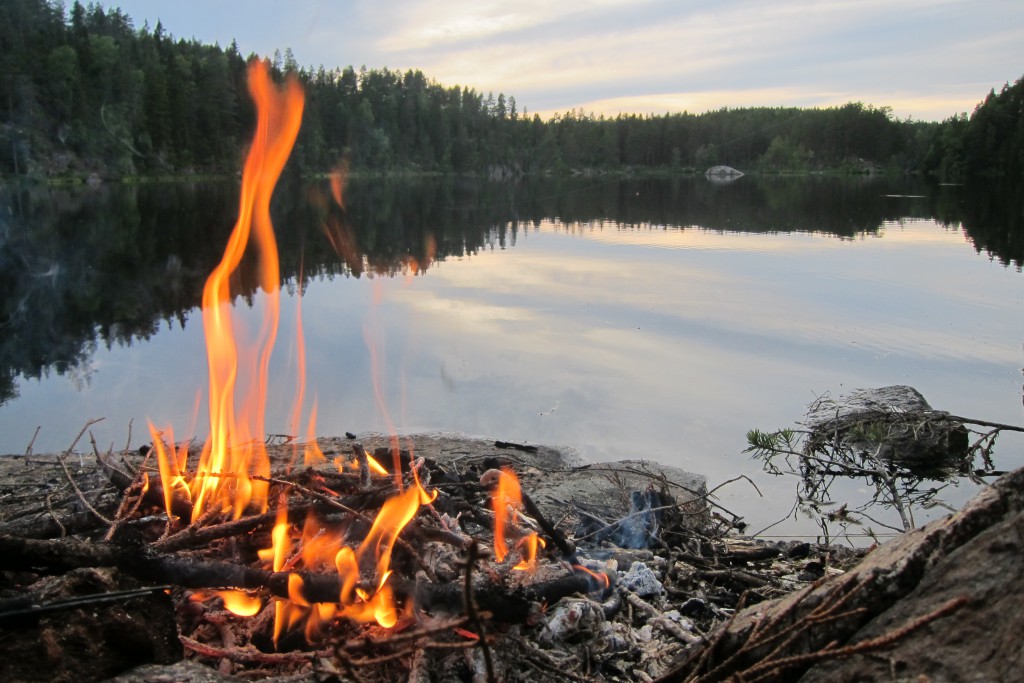 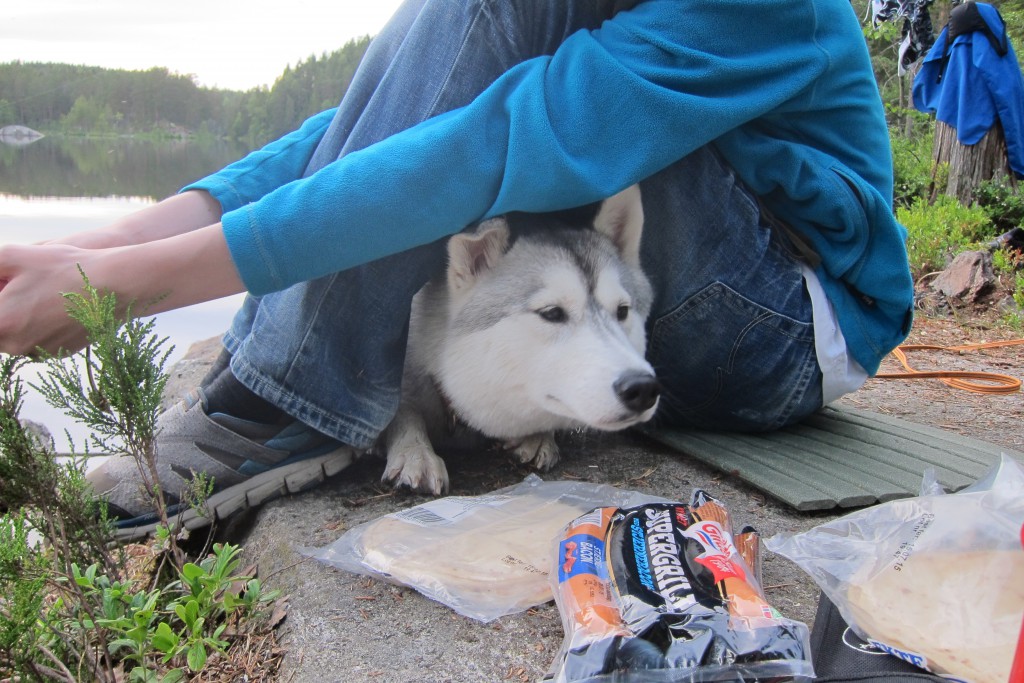 The moment the fishing rod was ready, the wind calmed down. Completely!  The fish didn’t care for the bait, but suddenly we became bait for the midge! “Mygga, the best choise against mosqitos and midge.” Yeah, right…
Lighting the fire didn’t help either, other than we could finally BBQ those hot dogs. There’s nothing like hot dogs BBQ’d on a stick over the fire… 🙂
Because we’d remembered our mosqito hats, we were able to sit outside a bit longer. Only the teenager sought shelter in the tent. Issi too were going nuts over the midge, constantly moving around, roling around in the heather. We resigned and went inside the tent.
The plan was to let Issi sleep in the front part of the tent, but no, she did not agree to that! Too much insects. We had to take her into the inner tent. 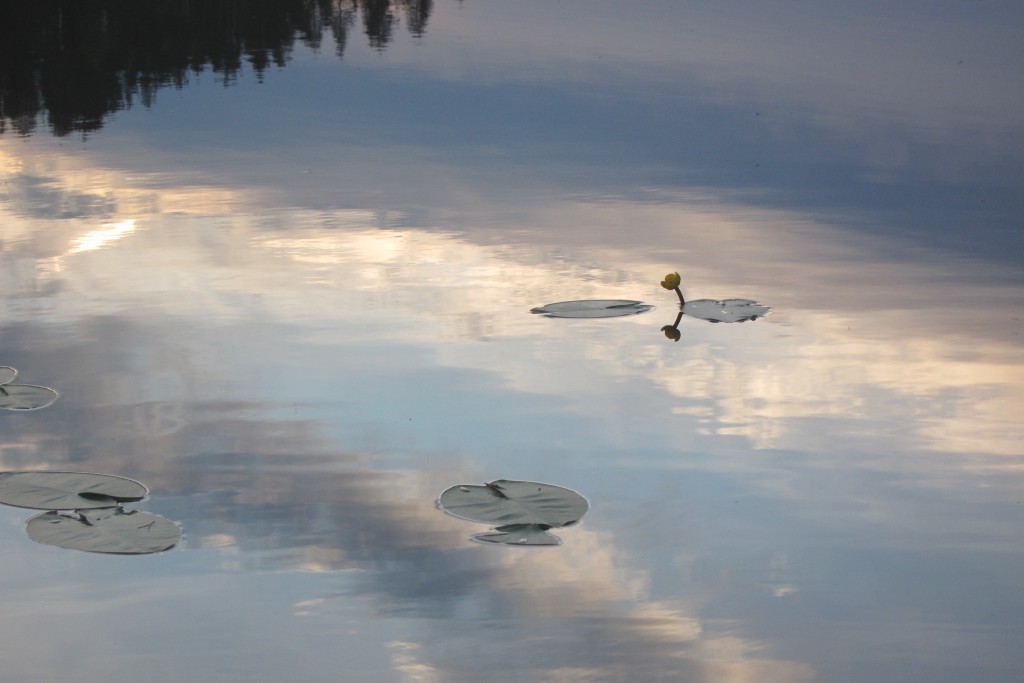 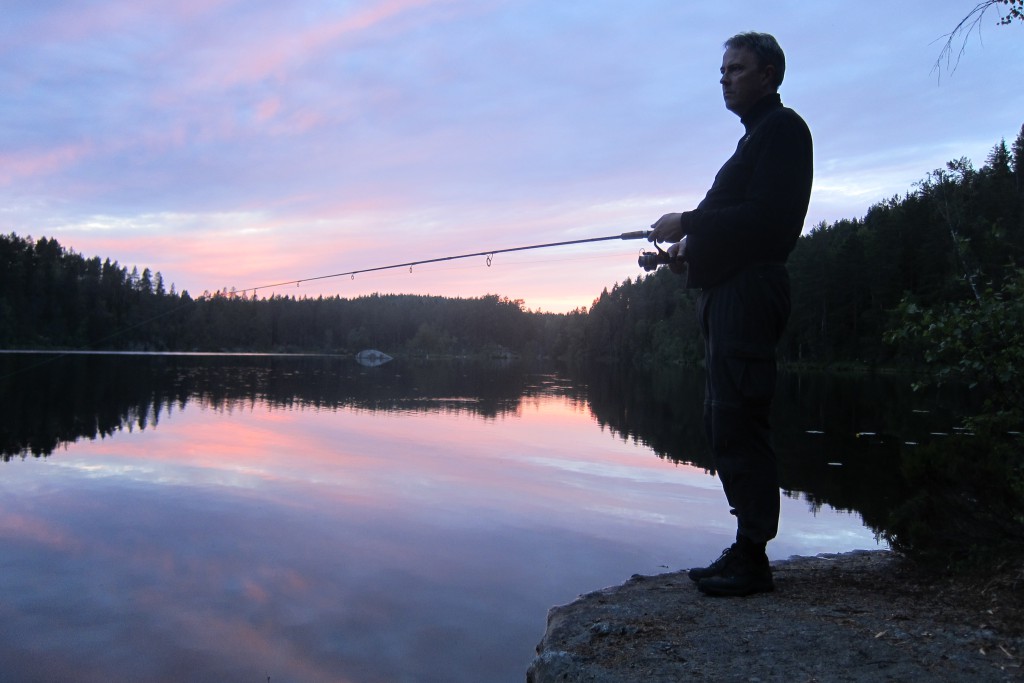 It’s not easy to have a good nights sleep in a tent. It’s warm, the ground is uneven and the tent is not exactly spacious, although ours is supposed to be suiteble for 4 persons.

Anyway, Hubby did not have a good nights sleep. I was rudely awakened when he decided to get dressed and get out. So me and the teenager got up and out as well. We sat in the morning sun eating a light breakfast. I even had coffee! Had bought a “coffee for one-in-a-bag”, just add boiling water, wait a bit, and it’s ready. Perfect! 🙂 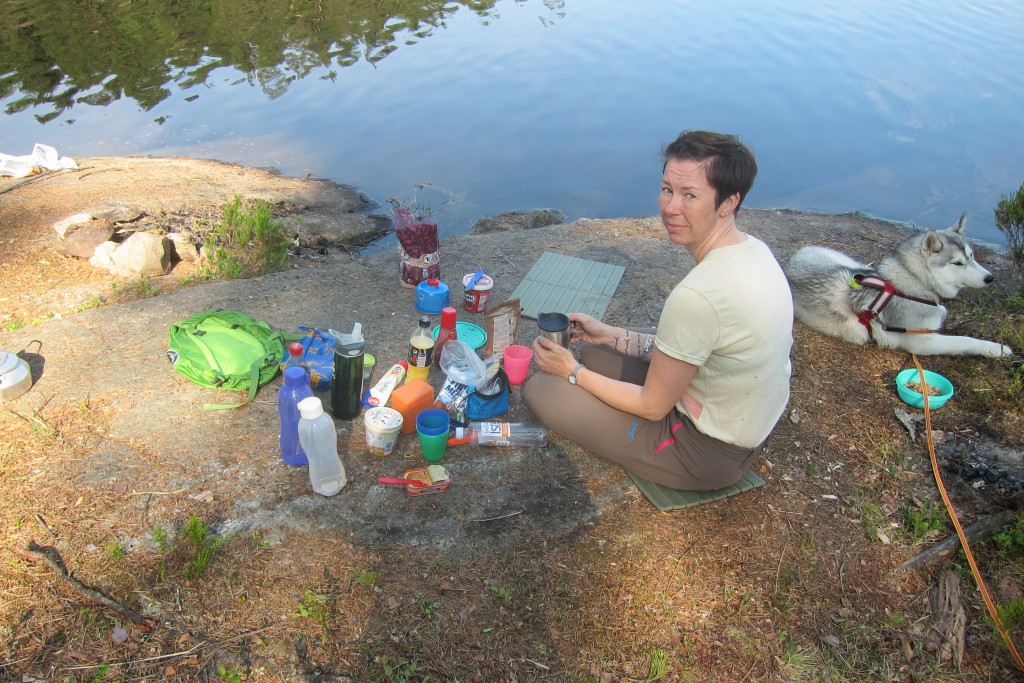 After brekkie, there wasn’t much to do but to wrap up. We were rady to head back by noon, back at the car by 1pm and home by 1.30pm. And to no ones surprice, I had to wake up the oldest son when we got home…

All in all it was a nice trip, and we even learned from it:
– Don’t bring too much candy! Unnecessary to carry half of it back home…
– When you give your dog a tick collar let it stay on for a while before entering “the land of the ticks”. A couple of hours is far from enough. Found two large ticks on Issi the next couple of days…
– Don’t forget to wear socks in your hiking shoes if you’re gonna carry a heavy backpack. At least bring Compeed! (which we did.)