We had been invited to Issi’s breeder Saturday 11th July, together with several other who had bought puppies from them in the past. The kennel is situated 2,5 hrs drive south of Oslo and since this was going to be an all day activity, we’d pre booked a small cabin at a camping site from Saturday til Sunday.

We started out just little after 9am Saturday morning. No sleeping in, no long brekkie, no newspaper. Had to bring some coffee on my thermo cup though. 🙂

After about an hour the roads had become narrower and more winding which made Issi throw up. Not for the first time, I tell you… So we moved Issi from her cage in the trunk, over to the backseat and I seated my self beside her. It didn’t take long before she’d crawled into my lap. Maybe she felt more secure there?  Kinda cute though.

Arriving at the kennel we were greeted by the breeder and the choir of her Siberian Huskies. They’ve got eight huskies themselves and one of their bitches is expecting puppies by the end of July.
Issi is a bit reserved when meeting more than one dog at a time, which actually is a good thing. Only two of their younger dogs were in the garden at this time, the others were in the dog pen.

Eventually, by the time the other dog owners arrived, Issi had become house warm which made it easier meeting the other huskies. 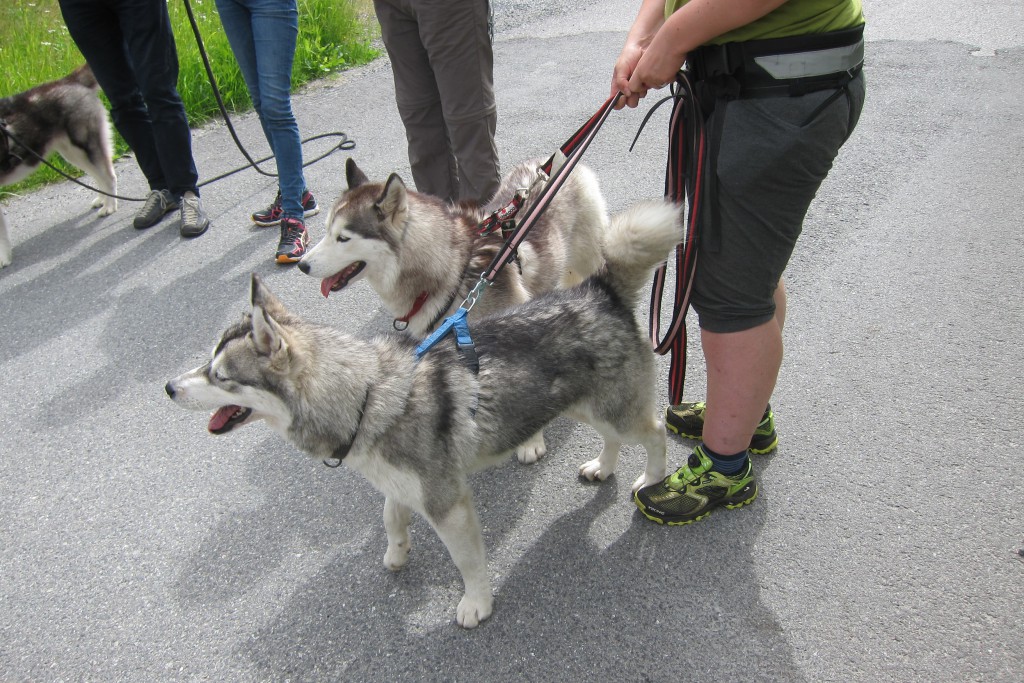 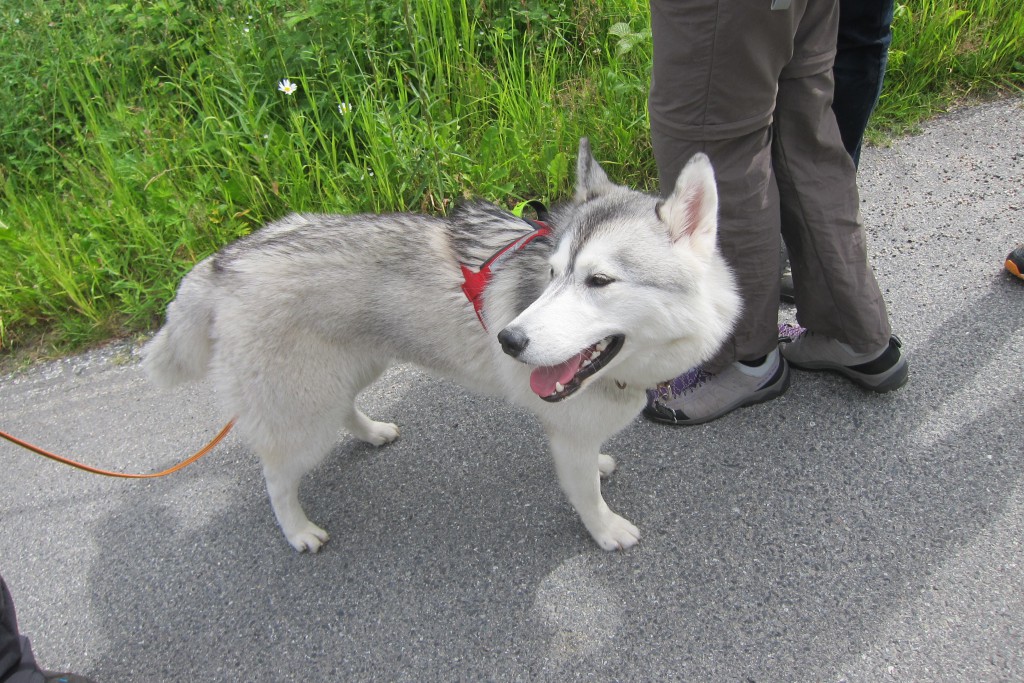 The plan for the day was first to take the dogs for a long walk, circa 10 kilometers, then a BBQ in the garden, followed by a crash course in grooming.
We followed an old trail which was totally overgrown several places. First stop was at a small lake, Jøntvedttjønna, where the dogs could drink some water and cool off a bit. The weather turned out to be quite hot that day.  We continued further up the hill, the trail got steeper and several places was partially blocked by fallen trees.
Finally at the top, we had another break. Both dogs and owners were tired, warm and thirsty! So glad I remembered to bring waterbottles. 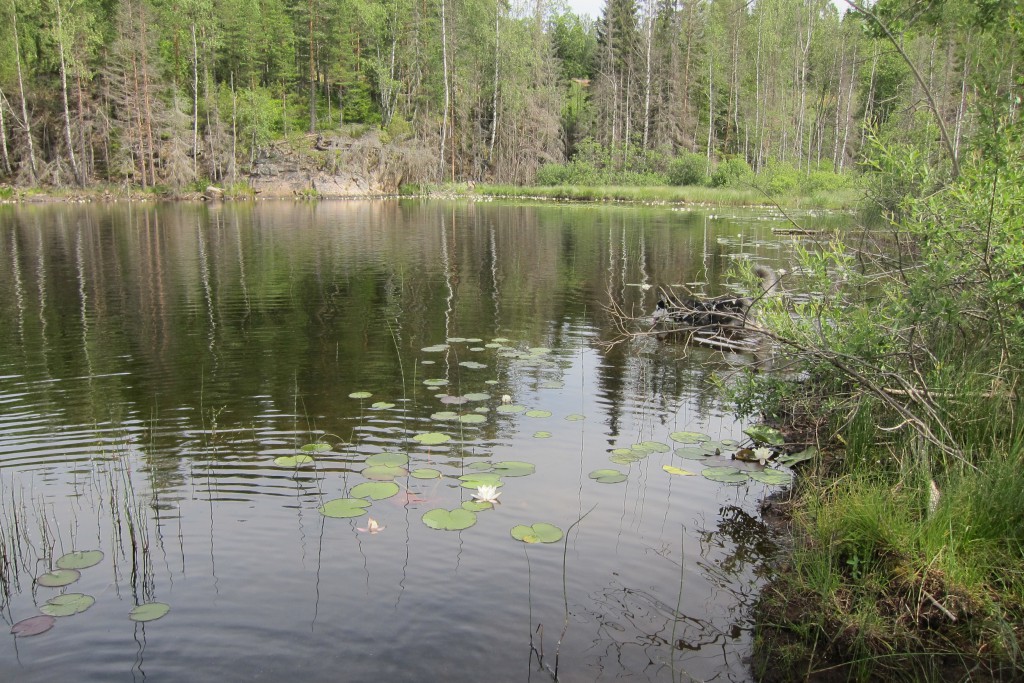 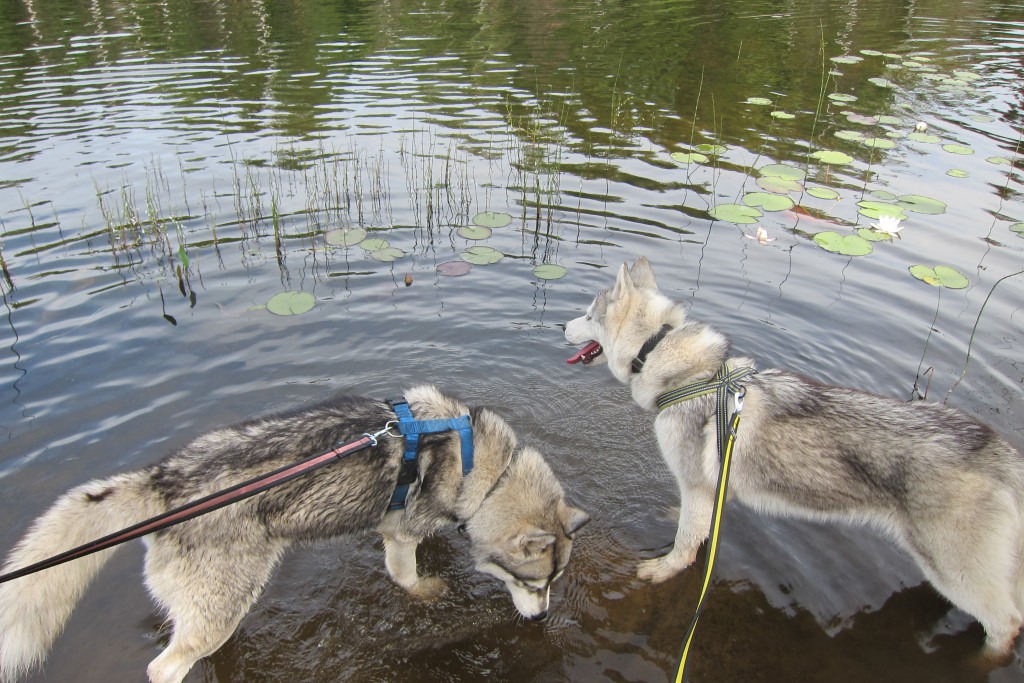 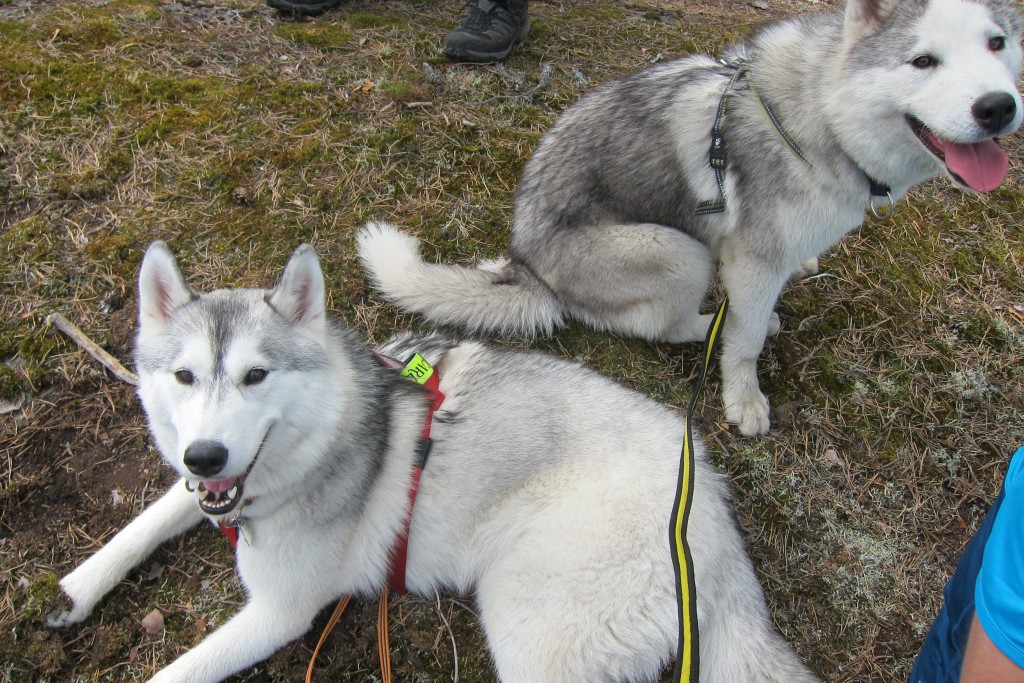 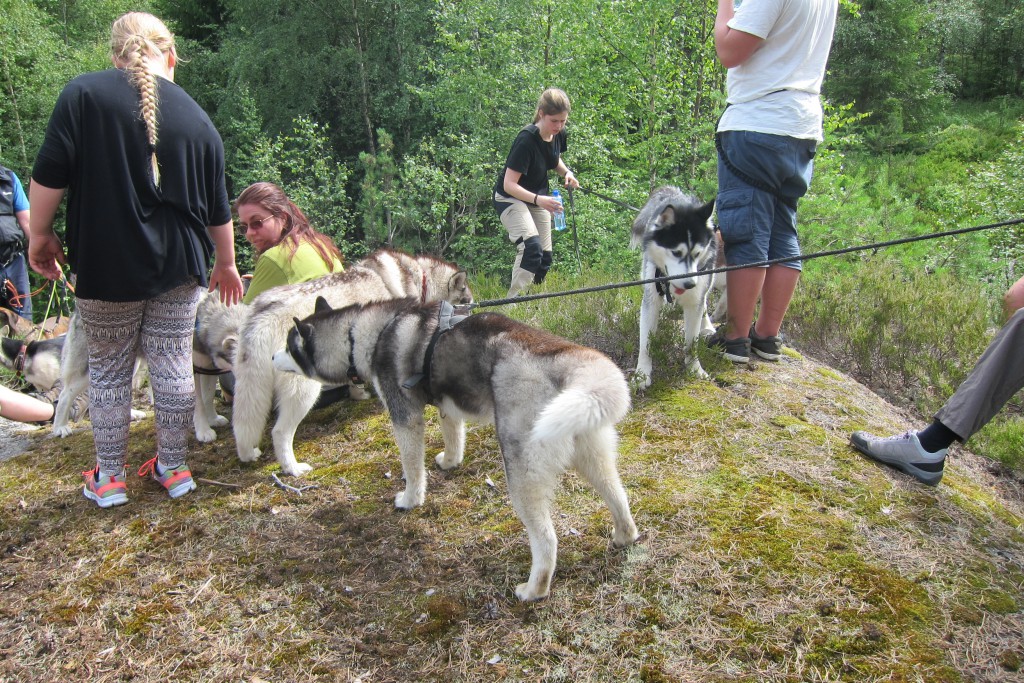 After the break, the trail went downhill. Eventually we entered a wider and more recently used part of the trail, which made it easier to walk.

Back at the kennel, everyone checked their dogs for ticks and we found a lot of them! I lost count on how many we found on Issi, and we continued to find several on her the following week.
As those more hysterical continued to check for ticks, our hosts prepared the BBQ. Everyone had brought their own choise of meat, our hosts supplied the trimmings.
Some of the dogs seemed hungry, and the smell of meat didn’t exactly make things better. Issi actually managed to grab an unfinished burger from the grill, but no way she was gonna get away with that! I grabbed her, and grabbed the burger right out of her mouth. 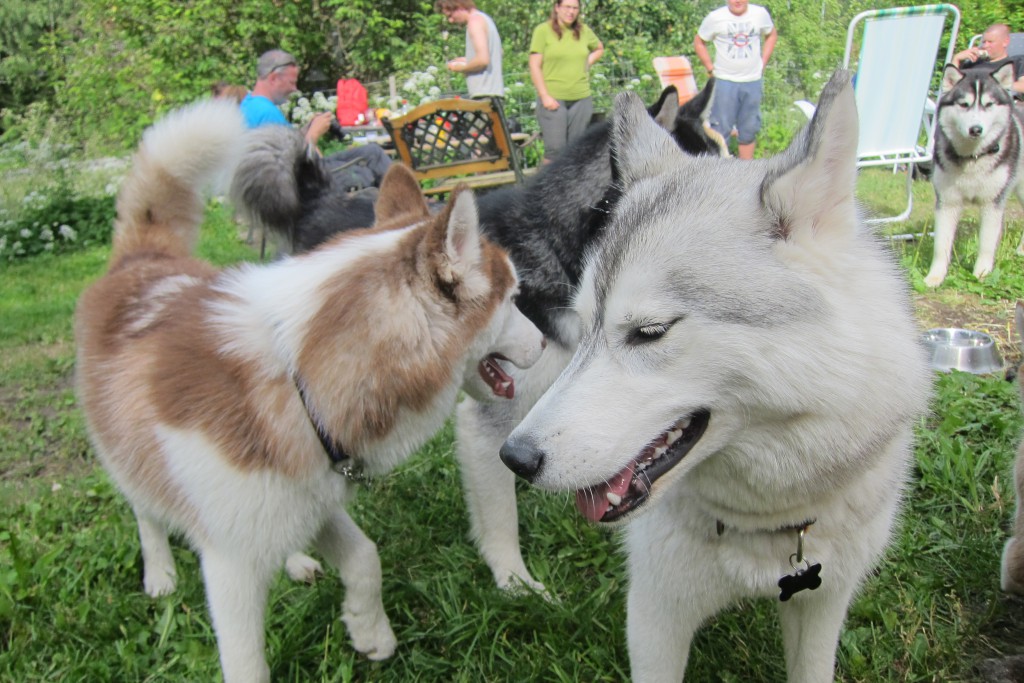 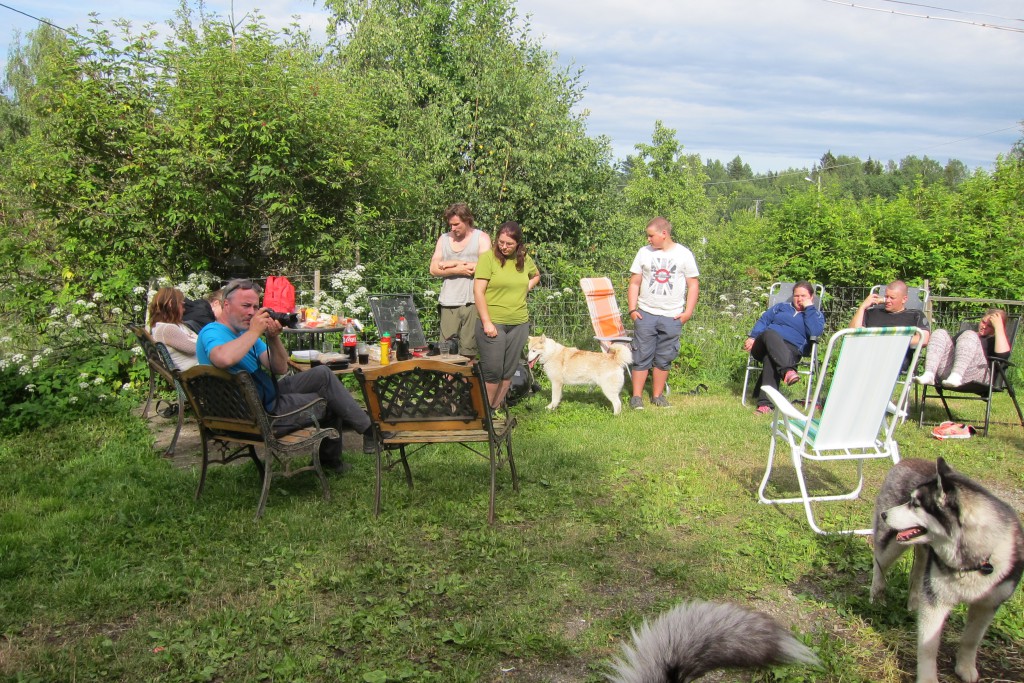 The crash course in grooming, was held by one of the former puppy byers. If there was a prize for most winning show dog, his dog would have won.
I definetly learned a lot, for example, I’ve done most of the grooming all wrong… But I’m not afraid to admit it, and not afraid to ask all the embarrasing questions to learn how to do it right.
Over the years I’ve discovered people are often afraid to admit they’ve done things the wrong way, and they are afraid to ask how to do things the right way. So I’ll do it for them! You should see all the relieved looks I get sometimes. 🙂 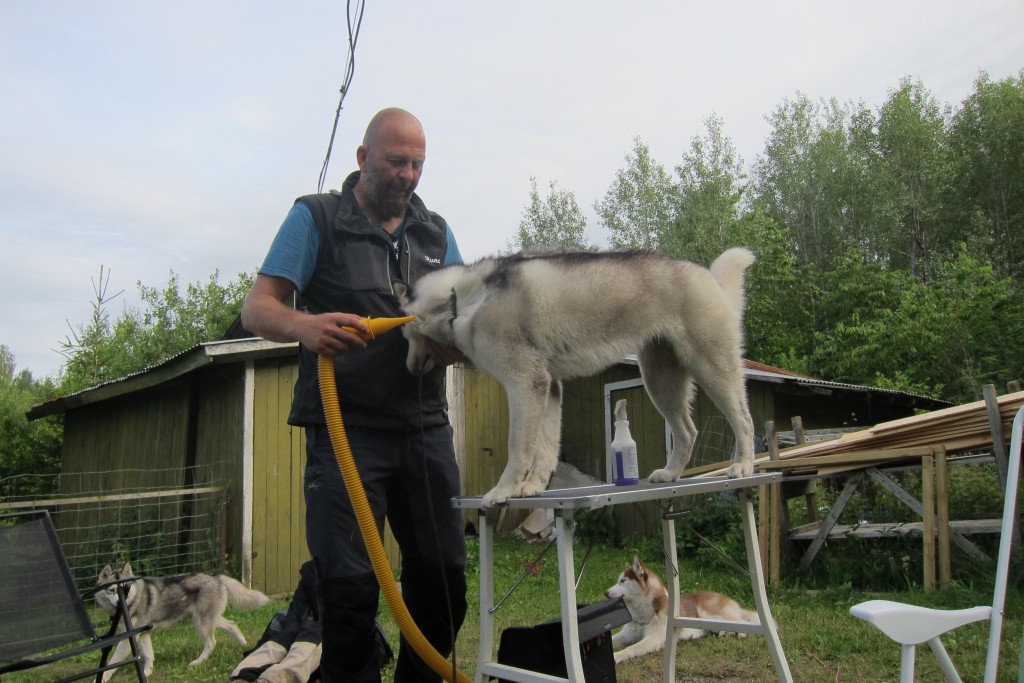 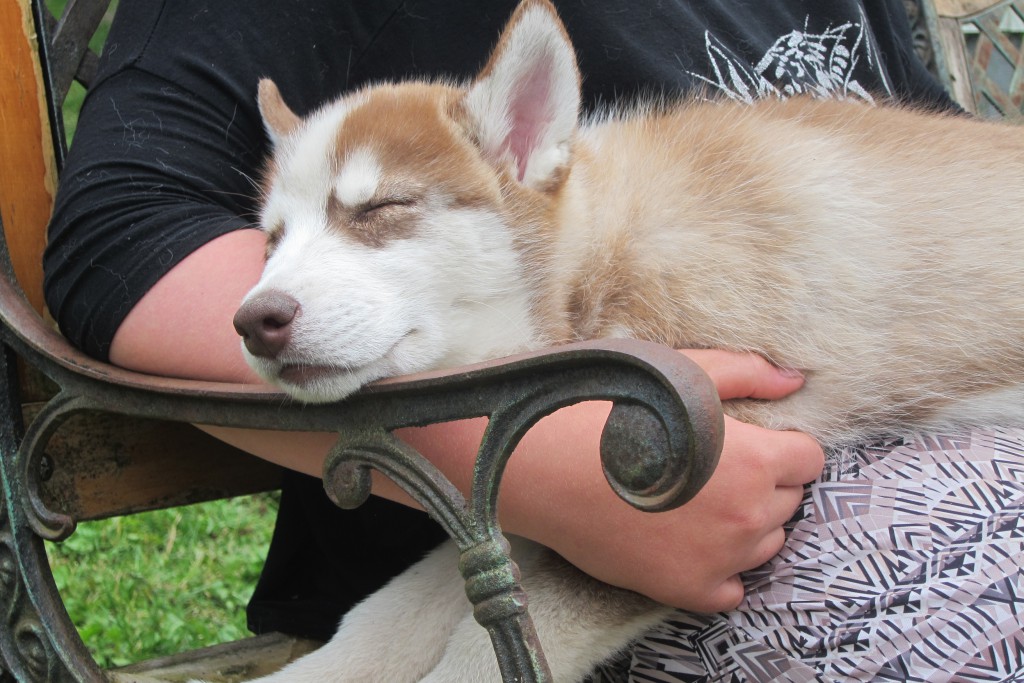 When the day came to an end we drove to the camping site, Sanda Camping and Cabin. Nice place by the river, far from luxorious, but the cabin covered all our basic needs. We were too tired to even turn on the telly anyway, and Issi passed out on the doormat.

Coming home on Sunday was great, and once again we could wake up our oldest son on arrival. 🙂